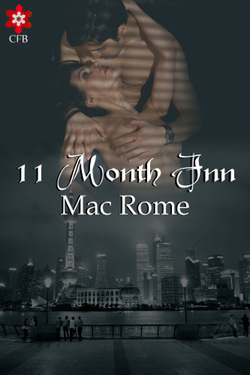 Lost on the Appalachian Trail, Carl Baker finds a hidden cabin called the 11 Month Inn. Inside he meets beautiful women ranging from small to towering, and finds his feelings growing fast for petite, sexy and lonely Rue.

But as he learns more about the inn’s residents and their mystical secret, Carl faces a difficult choice. Does he leave without Rue to return to the life he’s known, or stay with her and leave his world behind?

Excerpt:
Carl came to the edge of a clearing. Before him was a log cabin – a huge log cabin. It was two stories tall. There were three windows across the top floor and two on either side of the door at the center of the front. There also was a large, wrap-around porch with a roof. The timber, while weathered, appeared to be from native trees.

Carl quickly realized why the light he’d seen appeared to be from a campfire. It was firelight, but from various sources. Inside he could see candles through three windows and a kerosene lantern through a fourth. Fireplaces could be seen in the remaining two windows.

As he approached, Carl spotted a small sign to the right of the door, made of the same wood as the cabin. It read, “11 Month Inn.”

Although he hadn’t planned to stay at any kind of hostel or motel, this was too appealing to Carl. He walked onto the porch.

Then he spotted her. She was peering through a ground-floor window at him. She had a heart-shaped face and beautiful red hair. Her complexion was pale, and her eyes ice-blue. Those big eyes were staring at Carl, looking amazed. He could tell she was tiny. Even so, the window was so low she was forced to lean over, the scoop neck of her blouse revealed ample breasts for her size.

Carl stopped and waved. He wanted to appear friendly to whoever was here – and especially to this petite beauty.
She stood up straight, showing off a tiny waist and a butt just round enough to be magnificent. Her left hand to her chest, she waved with her right. Then she ran backward into the room.

After a few seconds, Carl heard the groan of old hinges in front of him. The tiny woman had opened the door. She beamed up at him. “Hello.”

The woman shifted her weight onto one foot, looking up at Carl. She nodded. “There’s always a room here. Come on in.”

Carl entered. “I’m sorry I don’t have a reservation.”

“That’s okay,” the woman answered. “No one has a reservation except those of us who live here.”